Menu
To paint or not before selling

Recently, we were contacted by an out-of-town owner who was having trouble selling her house in Delta.  It seems she had carried the mortgage for the buyers when she sold and they had surrendered the house back to her in February after six years of residency. She had the previous listing agent put it back on the market and, being out of town, relied on his expertise in how marketable the house was. Based on his market analysis and report that the house was sellable with a little cleaning, she paid him to do a move-out cleaning and list it for $130,000.  Over the next ten months she fretted as her house got few showings and no offers while receiving feedback like, “I love the yard, but the house isn’t worth that much.” She tried lowering the price, more than once, to no avail; so she finally called the HappyPainters.

First impressions are so important when selling – Make yours count!

Normally we don’t do long-distance jobs, but the schedule was light and the owner is a personal friend, so we went as a personal favor to give the place a new look sight unseen. What we discovered makes me question the agent’s definition of “sellable”.  Upon entering the house, the first thing buyers were greeted is two large squares on the living room wall where someone had used it as a backdrop for some spray painting. Our guess was the original spay paint was brown, but that was a bit too unsightly, so they covered it up – with white spray paint. Overall the place looked like it hadn’t been painted in over fifteen years which, according to the owner, it hadn’t and had lots of nail holes. Some of the trim was pretty beat up as well. I can honestly say I fully understand why it hadn’t sold even after a $25,000 price reduction – potential buyers were facing a full paint job before they could move in.  Like most sellers, ours had tried to avoid spending a few thousand dollars to properly paint (on bad advice, granted) and missed the prime buying season. 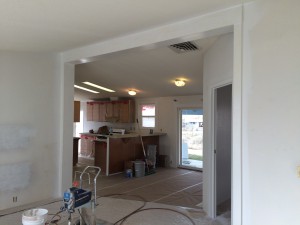 A work in progress

We set out to properly prep and paint the house so the owner could increase the price and hasten a sale by maximizing its appeal. It was decided we would go with white ceiling, white trim and off-white walls, and we got rid of the awful false beam in the middle of the house by painting it trim-white. It took a total of twelve man-days, but the results speak for themselves – everyone we spoke to agreed: we added tangible value in the area of $10,000 to $15,000 to the property.  Unfortunately for the seller, the house went under contract while we were still working on it and closed two days after we finished, so the buyers got increase in equity from our labors, but I can’t help but think that, after months and months with no offers, the buyers’ seeing our work in progress wasn’t a motivating factor. 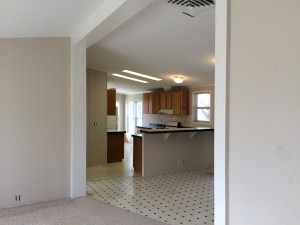 A look that sells!

So the moral of the story is threefold:  First – when it comes time to sell a property, it can often be more profitable and expeditious to spend the money to paint before you list. Secondly – If you can’t personally inspect your property in a time like this, make sure you have someone with your best interest do so. Had our seller’s agent been more forthcoming she could have had it painted, increased her profit substantially and increased her agent’s commission around $500 in the process. Finally, if you’re an agent who feels a property would be more sellable with a cosmetic facelift, you’re doing your sellers (and your wallet) a disservice if you don’t make sure they understand the financial implication of not doing it.