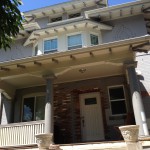 The ‘extra’ door was on the left. 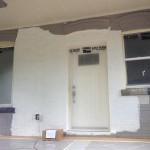 Priming all the raw brick to insure proper adhesion 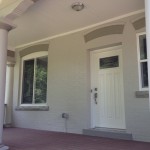 To the untrained eye this wall was always like this 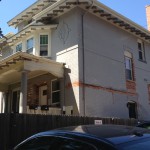 The catwalk and stairs for the upper apartment ran along the side and straight down along the front porch. Part of the overhang and rafters had been cut away to allow proper clearance. 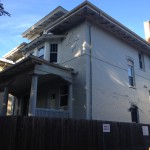 Except for the damage to the porch roof no one will tell the walkway was ever there. 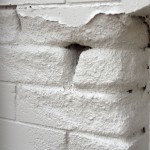 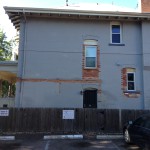 The door converted back into a window. 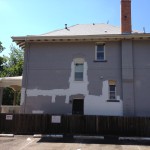 We rolled the primer into the wall to gaurantee all the pores, grooves, edges, and holes are completely coated 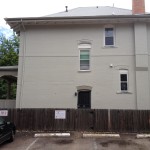 The scars will never show! 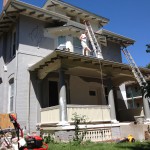 These turn-of-the-Century Denver homes are awfully tall. You’ll notice even brick homes are sealed up wherever possible. 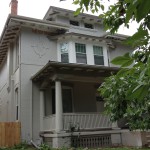 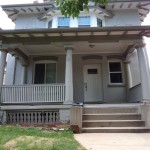 The historic Congress Park area of Denver has many beautiful turn-of-the-century homes that, over the years, were converted into multi-unit apartments. Usually, much of the architecture was kept intact as much as possible. Walls were added or torn down, doors were installed, plumbing had to be redone, but the main structure was the same. So it was with this lovely home. The owners were in the finishing stages of renovating this colossus back into a single-family dwelling from a four-plex.  The inside was done, the brick work was complete and it was time for the HappyPainters to protect it for the decades to come.

We use the same process for brick as for frame homes – there’s not a lot of slats to caulk, but the transition between sub-straights is a natural problem area, so we still had our work cut out for us. In the end, the results were fantastic. We sprayed the body, paying special attention to coverage on all the angles, sprayed the soffit, then brushed the ‘trim’ eyebrows above the windows and doors and all the exposed rafters. A classic look for a classy house.